The conventional view of biology and its limitations

For decades our understanding of cell biology has focused on two key aspects. The first is an obsession with membrane-bound organelles (such as mitochondria, lysosomes, and the endoplasmic reticulum) and their role in the organization of the key cellular functions. For example, the energy source of the cell is compartmentalized inside a mitochondrion.

But this classical view has always been hard to reconcile with images that show cells to have large numbers of condensates that lack membranes and perform diverse functions. This 1903 drawing by Santiago Ramón y Cajal, for instance, depicts pyramidal neurons with visible Cajal bodies (a), nucleoli (b), and speckles (c). It has become increasingly clear in the last decade that a significant proportion of proteins and RNAs in a cell are located in distinct condensates, where they perform diverse functions.

The second assumption is that proteins, the machines of the cell, have well-defined and stable structures that perform their functions through changes in their conformation. However, these approaches have downplayed the 40 percent of the coding sequence that encodes segments of proteins called “intrinsically disordered regions” (IDRs). IDRs have been understudied, largely because their structures cannot easily be trapped by conventional techniques, such as crystallography, which have traditionally been used to characterize protein structure.

Human genetics studies are increasingly pointing to critical roles of these IDRs in disease, and parallel work coming from physical chemistry and cell biology has shown that IDRs are also essential for condensate formation. The fusion of these two fields is rewriting the rules of cell biology and disease.

A new approach to biology

“The real voyage of discovery consists, not in seeking new landscapes, but in having new eyes.” Marcel Proust

Starting with the study of P granules in C.elegans embryos in 2009, Tony Hyman, working with his collaborators like Frank Julicher, Cliff Brangwynne, Simon Alberti, Mike Rosen, and Rohit Pappu, began to unravel the mysteries of biomolecular condensates. These scientists realized that P granules behave like liquid droplets that form by phase separation (think of oil droplets in salad dressing) and called them condensates.

In subsequent studies, they found to their surprise that many compartments inside cells had the behavior of condensates: they are liquid-like and form by phase separation.

Inspired by the work of Tony and his colleagues, Richard Young, Phillip Sharp, and Arup Chakraborty at MIT applied these approaches to the study of gene expression, similarly shedding light on many important questions in gene control. Tony Hyman on how cells form compartments. (From LatestThinking.org via CC BY 4.0; trimmed for length.)

Starting with the study of stress granules and their role in ALS, researchers, including members of the Hyman Lab, began to connect biomolecular condensates to disease. Dewpoint now believes that a vast range of diseases have pathways that are regulated by condensates or arise from the dysfunction of condensates, in areas spanning cancer, neurodegeneration, cardiovascular disease, and metabolic disease. In addition, biomolecular condensates offer a new approach to “undruggable” target classes like transcription factors and phosphatases. 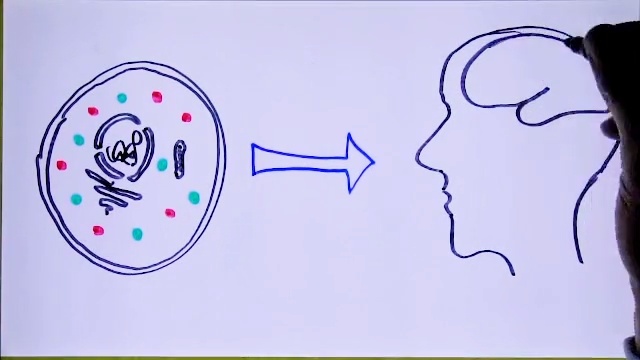 Biomolecular condensates can fuse over time. Stress induces the formation of condensates in iPS cells.

Dewpoint is building proprietary tools for purposefully exploiting condensates to treat the most important diseases that patients face. If you would like to learn more about our platform please contact us.

The concept that cellular compartments are liquid-like and form by phase separation reaches back over a century ago to seminal advances in physical chemistry by Gibbs, Van ’t Hoff, and Oswald, among others. Physical chemistry describes the macroscopic properties of materials that emerge from atomic structures. However, with the dominance of organic chemistry and protein sciences, and the subsequent sequencing of the human genome, the focus for the past half century has been on describing and characterizing individual molecules and proteins.

Hence, the question of how collections of molecules operate together was never really resolved. The work over the last decade describing condensates as liquid-like structures that form through phase separation paves the way for a much better understanding of a range of biological phenomena.

The physics underlying condensate behavior differs from the classical approaches to condensed matter formation. This is because cellular processes are complex and non-linear, typically operating out of equilibrium (see, for example, Zwicker, Hyman and Julicher (2015) Phys Rev E).

This confluence of biology and physics will revolutionize both fields. Dewpoint has assembled a diverse group of scientists, spanning biology, chemistry, physics, physical chemistry, mathematics, chemical engineering, and drug discovery. Together, this team of researchers is advancing the field of biomolecular condensates and the study of their role in biology and disease.